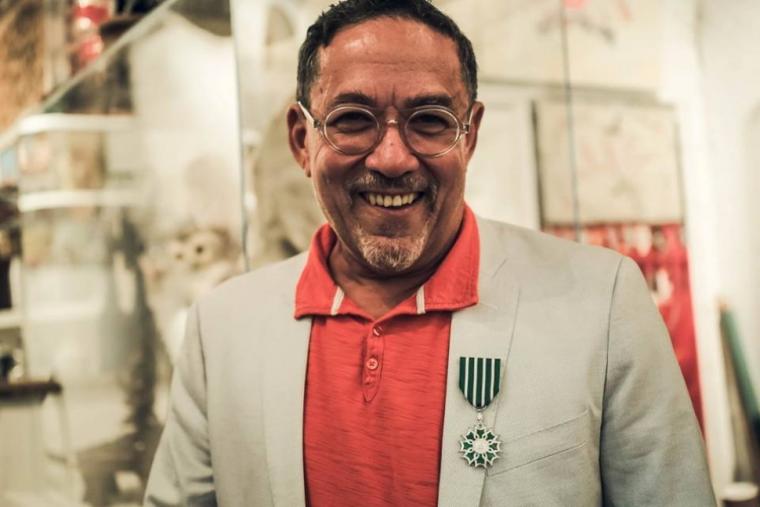 Born in Haiti and raised in Miami, the noted painter, sculptor, and exhibitor Edouard Duval-Carrié Studio takes part in a special virtual presentation on August 16, offering online guests a tour of his studio and the chance to ask questions in a program hosted by the Figge Art Museum and held in celebration of the Davenport venue's 15th anniversary.

Duval-Carrié was born in Port-au-Prince and, with his family, emigrated to Puerto Rico while he was a child. He studied at the Université de Montréal and McGill University in Canada before graduating with a Bachelor of Arts from Montréal's Loyola College in 1978. He later attended the École Nationale Supérieure des Beaux-Arts in Paris from 1988 to 1989, resided in France for many years, and currently lives in Miami. His first exhibition was held at the Centre d’Art in Port au Prince, which helped launch the careers of some of Haiti’s most renowned painters and sculptors, and Duval-Carrié's work has been featured in solo exhibitions worldwide, including at the Figge in 2005 and 2017. The Figge was the first museum to acquire his work, and his portrait of Dr. Walter Neiswanger – founder of the museum’s Haitian collection – is on view in the museum.

The artist's work reflects the culture and history of Haiti with references to the Vodou religion and is often overtly political, executed in attempts to embody his nation's spirit and its troubles with an attitude that is neither detached nor ironic. Duval-Carrié's 1979 work J.C. Duvalier en Folle de Marié (Jean-Claude Duvalier as Mad Bride) is a criticism of the country's controversial leader, and in his later work Mardigras at Fort Dimanche, the artist juxtaposes Duvalier against a torture chamber, an army general, and other symbols of the repressive regime. New York University classified Duval-Carrié's output as magical realism for an event to accompany the book launch of Continental Shifts: The Art of Edouard Duval-Carrié. In addition to painting and sculpture, Duval-Carrié also operates in a variety of additional media, including altarpieces, lacquered tiles, and reliquaries.

The virtual tour of the Edouard Duval-Carrié Studio on August 16 takes place from 7 to 8:30 p.m., tickets are $15, and advanced registration is required, with participants receiving a Zoom link to the program on the day of the event. For more information, visit FiggeArtMuseum.org.