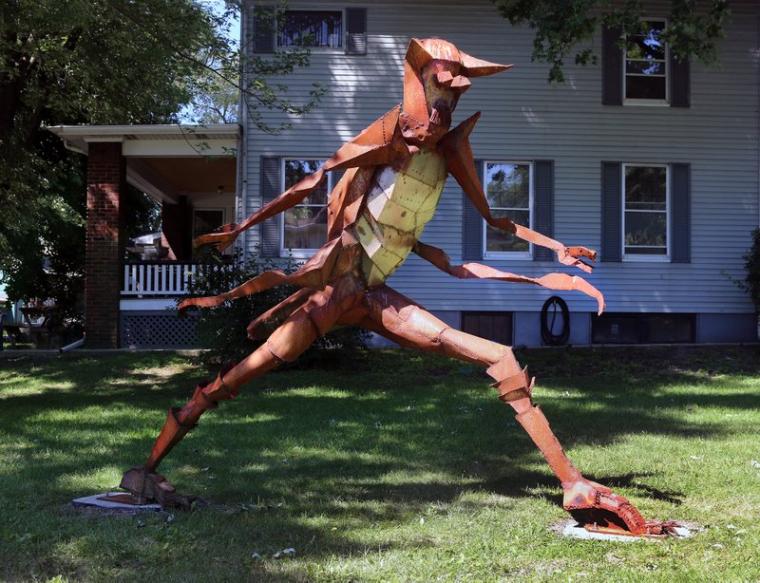 A human-like insect – larger than you – is frozen in a 10-foot-long stride. Its flailing arms are extended. All four of them.

Standing not in a summer blockbuster, and not in your nightmares, but on a lawn in west Davenport.

Metamorphosis, by Jacob McGinn, is a metal sculpture recently installed in a neighborhood at the intersection of Fourth Street and Telegraph Road, easily viewed from the street.

The sculpture’s welded-metal surface is perfect for an insect’s hard exoskeleton. Its repeated rough forms and forward tilt express a sense of motion.

In spite of its alarming form, its suggested movement – countered by a somewhat symmetrical pose – does not feel predatory or threatening. Although it has bulging eyes and a horned head, the face is surprisingly gentle. It is a fascinatingly contradictory work. In a statement about his work, McGinn wrote: “The piece started as scraps of metal that were welded together. After a while it began to look more insect-like, and I was told to read ‘The Metamorphosis’ by Franz Kafka. The story influenced me to create a piece with insect body parts and human-like features.”

The story begins – in an English translation by John R. Williams – “One morning Gregor Samsa woke in his bed from uneasy dreams and found he had turned into a large verminous insect.”

Samsa’s transformed body has an armor-like back. Its many legs wave helplessly before his eyes. The author never explains the character’s transformation. No reason is given. There is no indication that the character deserved it.

The sculpture’s inexpressive face and gestures convey the same emotional detachment felt in the story. Its rusted surface and use of discarded materials evoke Kafka’s theme of rejection.

Both the story and the artwork are not simple puzzles to be solved when missing pieces are found. They reach toward the unfathomable. Questions about perception, reality, normalcy, rationality, and judgment are asked – but not answered.

The sculpture’s placement in a quiet neighborhood makes the artwork all the more enigmatic. Like Kafka’s first sentence, there is a jarring juxtaposition of the mundane and inexplicable. Art can make the ordinary strange and the strange ordinary, and that’s true of this sculpture – especially when seen in context with its surroundings.

Metamorphosis was purchased by Tom Chouteau, a Davenport artist best known for his astonishing kaleidoscopes, and installed in July at his home. Chouteau first saw the sculpture in Dubuque, where it was temporally displayed as part of the city’s Art on the River public-art program. “I drove by it probably 20 times that day,” he said. “It was the most incredibly alive sculpture I’ve ever seen – nothing abstract about it! It was alive and organic. The feeling I got from the sculpture is that it’s comfortable in its skin but nervous about where it has to go next.”

Chouteau is planning to install additional sculptures on is property in the near future. “Sculptures,” he said, “play off each other so nicely. If you’re going to have more than one sculpture, I think it’s good to have three.”